MONTREAL (QC), April 17, 2019 – Xebec Adsorption Inc. (TSXV: XBC) (OTC: XEBEF) (FRANKFURT: XB6) (“Xebec”), a global provider of clean energy solutions announces its 2018 fourth quarter and full year financial results. A new accounting policy method regarding revenue recognition – IFRS15 – has been applied. As a result, the financial statements reflect the impact of the change, with and without the IFRS15 Standard. 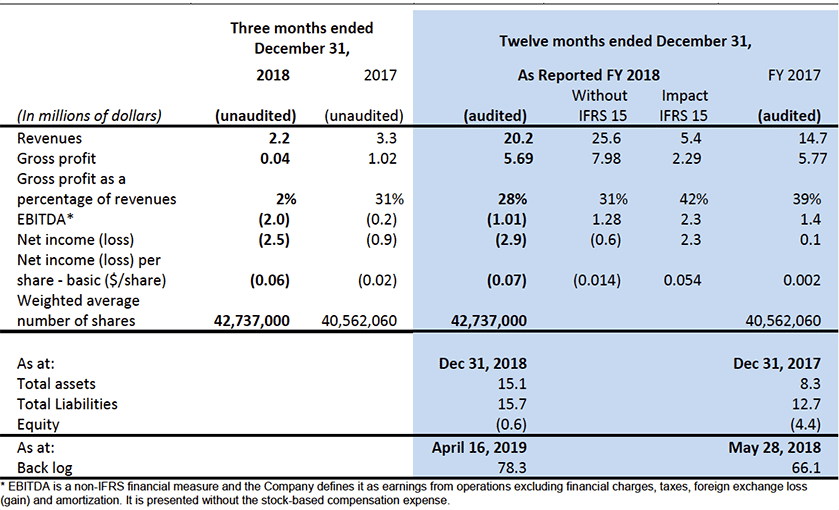 Application of new IFRS 15 accounting standard: under IFRS 15, revenue recognition as a percent of completion requires a cancellation clause that stipulates that the company is entitled to cost, margin and profit. This clause is present in Xebec’s North American and European contracts but a recent audit of seven (7) contracts from Xebec China worth approximately $5.44 million revealed that the contract language did not meet the updated cancellation clause requirements of IFRS 15. As a result, the Company will need to complete the projects and hand over title before it recognizes revenue. Completion for all 7 projects will occur within the first three quarters of 2019.

Current Market Conditions and Guidance for 2019
The market conditions for renewable natural gas and hydrogen purification equipment remain strong across all
our operating geographies. We expect significant revenue growth both in our European and Chinese subsidiaries,
as well as strong growth in our North American business for 2019. Our guidance for 2019 is based on current order backlog, plus future orders we expect to book in the first 9 months of 2019. We expect revenue growth for 2019 of at least 125%, leading to revenues of CDN$ 45.0 million+, and earnings per share (EPS) are expected to be in the range of $0.10 to $0.13.

Organizational scale-up is one of the important activities for 2019 in order to assure future growth of the company.

Systems – Clean Technology
Our Clean Technology segment continues to outperform expectations and our quote activity has significantly
strengthened compared to prior years. We regard quote activity as an early indicator for future order activity. Our current quote log exceeds $540 million, and our order backlog is over $78 million. Xebec is emerging as a worldwide leader in biogas upgrading technology. We maintain our forecast that the Systems – Clean Technology segment will grow 130% to 150% in 2019, generating revenues of $33 million to $35 million.

Service and Support – Industrial Air & Gas Products
Xebec continues to pursue organic and inorganic growth opportunities in this segment and expects to double
revenues from $6.1 million in 2018 to $12 million in 2019. GM has been lower than anticipated in 2018 at 33%,
mainly due to low margin OEM sales, but Xebec has taken steps to bring the gross margins back in line with
historical data at around 40%.

The first acquisition, Compressed Air International (CAI) in Ontario, closed on January 1st, 2019, and Xebec is
currently working on its next two acquisitions. Xebec expects to close the second acquisition by mid-year and the third acquisition toward the end of 2019.

Infrastructure – Renewable Gas Generation
Xebec is actively working on the establishment of its renewable gas generation business. Our intent is to build,own, and operate (BOO) quality renewable gas infrastructure assets in Canada, and to sell renewable natural gas to obligated parties and other third party off-takers. Xebec hopes to announce its first project within Q2/19. No revenue or costs have yet been recorded.

About Xebec Adsorption Inc.
Xebec Adsorption Inc. is a global provider of gas generation, purification and filtration solutions for the industrial,energy and renewables marketplace. Its customers range from small to multi-national corporations and
governments looking to reduce their carbon footprints. Headquartered in Montreal (QC), Xebec designs, engineers
and manufactures innovative and transformative products, and has more than 1,500 customers worldwide. With
two manufacturing facilities in Montreal and Shanghai, as well as a sales and distribution network in North America,Europe, and Asia, Xebec trades on the TSX Venture Exchange under the symbol XBC. For additional information on the company, its products and services, visit Xebec at xebecinc.com.

Cautionary Statement
Neither TSX Venture Exchange nor its Regulation Services Provider (as that term is defined in the policies of the TSX Venture Exchange) accepts responsibility for the adequacy or accuracy of this release. Certain statements in this press release may constitute “forward-looking” statements within the meaning of applicable securities laws. This forward looking information includes, but is not limited to, the expectations and/or claims of management of Xebec with respect to information regarding the business, operations and financial condition of Xebec. Forward-looking information contained in this press release involve known and unknown risks, uncertainties and other factors which may cause the actual results, performance or achievements of Xebec or industry results, to be materially different from any future results, performance or achievements expressed or implied by such forward-looking statements. This list is not exhaustive of the factors that may affect forward-looking information contained in this press release. When used in this press release, such statements use such words as “anticipate”, “believe”, “plan”, “estimate”, “expect”, “intend”, “may”, “will” and other similar terminology. These statements reflect current expectations regarding future events and operating performance and speak only as of the date of this presentation. Forward-looking statements involve significant risks and uncertainties, should not be read as guarantees of future performance or results, and will not necessarily be accurate indications of whether or not such results will be achieved. A number of factors could cause actual results to differ materially from the results discussed in the forward-looking statements.