MONTREAL, (QC), June 23, 2021 – Xebec Adsorption Inc. (TSX: XBC) (“Xebec”), a global provider of clean energy solutions, is pleased to announce today that its wholly owned subsidiary HyGear, has successfully commissioned an on-site hydrogen generation system for TAYRAŞ’ used lubricant oil re-refinery in Turkey. Approximately 560 kg of hydrogen per day (205 tons per year) will be delivered under 125 bar by the fully automated system under a 15-year Gas-as-a-Service contract. TAYRAŞ’ facility is the first of its kind in the country and will be key to developing Turkey’s circular economy and reducing emissions from API Group II base lubricating oils. 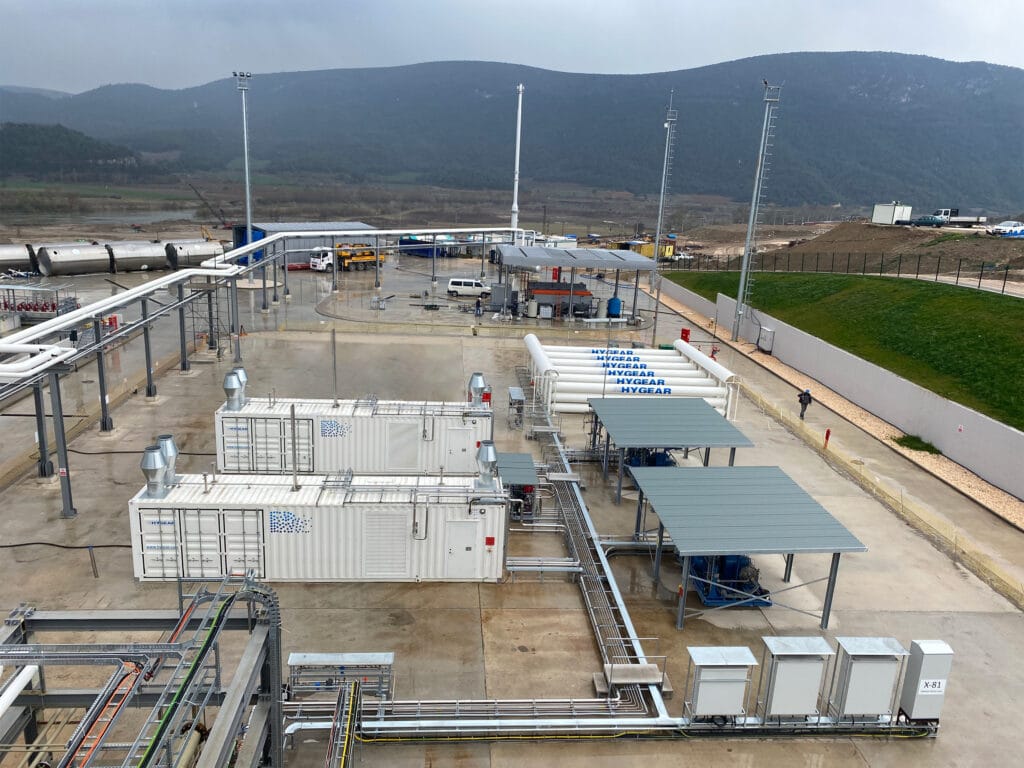 “This was a significantly large sized project for us and a unique one to be involved in within our reference installations. TAYRAŞ’ re-refinery shows the importance of securing local supply and reducing the carbon footprint of oils through recycling. Our on-site hydrogen offers the lowest cost and emissions option by cutting out the transportation and liquefaction steps from centralized hydrogen supply. In addition, we were able to showcase our expertise in compression by operating at an impressive 125 bar on a 24/7 basis. This level of operation will lend well to other applications such as hydrogen refueling stations where this pressure and reliability is also needed,” said Marinus van Driel, President of Xebec Europe.

The capacity of TAYRAŞ’ plant is 60,000 tons of used lubricating oil per year which is expected to produce approximately 45,000 tons of Group II base oil (N70, N100, N220). The hydrogen produced by HyGear’s system will be used to hydro-treat the used oils and remove sulphur, chlorine, nitrogen, phosphorous, silica and saturation of aromatics employing special catalysts.

Industry consultant Kline & Co. estimates that approximately 50% of used motor oil is re-refined in Europe. This amount falls to between 10% and 15% in North America. In Turkey, it is estimated by Petder to be as little as 7%.

About Xebec Adsorption Inc.
Xebec is a global provider of clean energy solutions for renewable and low carbon gases used in energy, mobility and industrial applications. The company specializes in deploying a portfolio of proprietary technologies for the distributed production of hydrogen, renewable natural gas, oxygen and nitrogen. By focusing on environmentally responsible gas generation, Xebec has helped thousands of customers around the world reduce their carbon footprints and operating costs. Headquartered in Québec, Canada, Xebec has a worldwide presence with six manufacturing facilities, eight Cleantech Service Centers and five sales offices spanning over four continents. Xebec trades on the Toronto Stock Exchange under the symbol (TSX: XBC). For more information, xebecinc.com.

This press release contains forward-looking statements within the meaning of applicable Canadian securities law. These statements relate to future events or future performance and reflect the expectation of Management regarding the growth, results of operations, performance and business prospects and opportunities of the Corporation or its industry. Forward-looking statements typically contain words such as “believes”, “expects”, “anticipates”, “continues”, “could”, “indicates”, “plans”, “will”, “intends”, “may”, “projects”, “schedules”, “would” or similar expressions suggesting future outcomes or events, although not all forward-looking statements contain these identifying words. Examples of such statements include, but are not limited to, statements concerning: (i) potential transferability of expertise in compression and 24/7 operation to hydrogen refueling stations as noted in this press release.

These statements are neither promises nor guarantees but involve known and unknown risks and uncertainties that may cause the Company’s actual results, level of activity or performance to be materially different from any future results, levels of activity or performance expressed in or implied by these forward-looking statements. These risks include, generally, risks related to revenue growth, operating results, industry and products, technology, competition, the economy, the sufficiency of insurance and other factors which are discussed in greater details in the most recent quarterly management discussion ana analysis (“MD&A”) and in the Annual Information Form of the Corporation filed on SEDAR at www.sedar.com.

Forward-looking statements contained herein are based on a number of assumptions believed by the Corporation to be  reasonable as at the date of this press release, including, without limitations,  assumptions about trends in certain market segments, the economic climate generally, the pace and outcome of technological development, the identity and expected actions of competitors and customers, the value of the Canadian dollar and of foreign currency fluctuations, interest rates, the anticipated margins under new contracts awards, the state of the Corporation’s current backlog, the regulatory environment, the sufficiency of internal and disclosure controls, the ability of the Corporation to successfully integrated acquired business, and the acquisition and integration of businesses in the future. If these assumptions prove to be inaccurate, the Corporation’s actual results may differ materially from those expressed or implied in the forward-looking statements. The forward-looking statements contained herein are made as of the date of this MD&A and are expressly qualified in their entirety by this cautionary statement. Except to the extent required by law, the Company undertakes no obligation to publicly update or revise any forward-looking statements contained herein. Readers should not place undue reliance on forward looking statements.